Last August, having spent the summer drifting in my MK2 Escort, I decided that I wanted to build something different for 2015. I bought the Escort in 2011 with the plan of restoring it into a nice road car but as the car was getting near to hitting the road I discovered drifting and that’s where the plan changed. By the time I sold it on it was an all out drift car designed for track use only.

It was modified from front to back and handled like nothing else, for a little car with a basic setup it could hang in with some big budget cars. I said I would never sell it, it had given me a new passion and purpose in life but I knew it was the only way I could build something new. It was really hard to hand over and felt like giving away one of my kids but that was that. 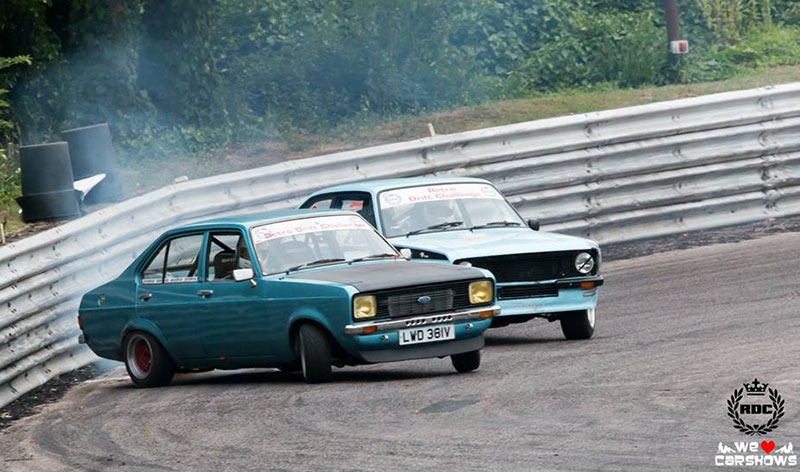 I had always wanted to build a hot rod/rat rod, I think they are so much more unique and personal. There are very few cars that I’m really passionate about but I could show you a fair few rods that float my boat.

I was having a good time doing drift demos for various car shows so decided I wanted to stick to doing that instead of competing, this meant I was able to go ahead and build something without sticking to any rulebooks. The plan was I could do both, build a rod and go drifting, I just had to build a Rod that could drift.

I started searching for a shell and one turned up about 100 yards down the road from my workshop. It was a 1953 Ford Anglia Hot Rod which had been cut up and used to repair another crashed Rod. It had no floors, no rear end and no bulk head but it did have a roof chop and was perfect for what I wanted it for, and for £200 my budget build was starting off on the right foot. 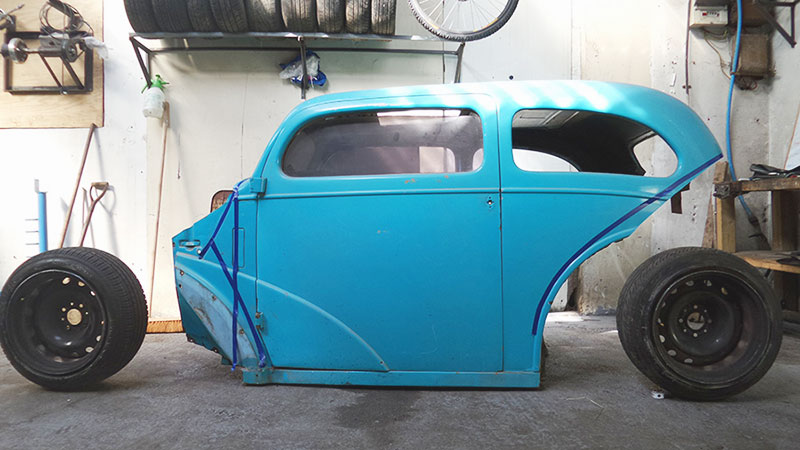 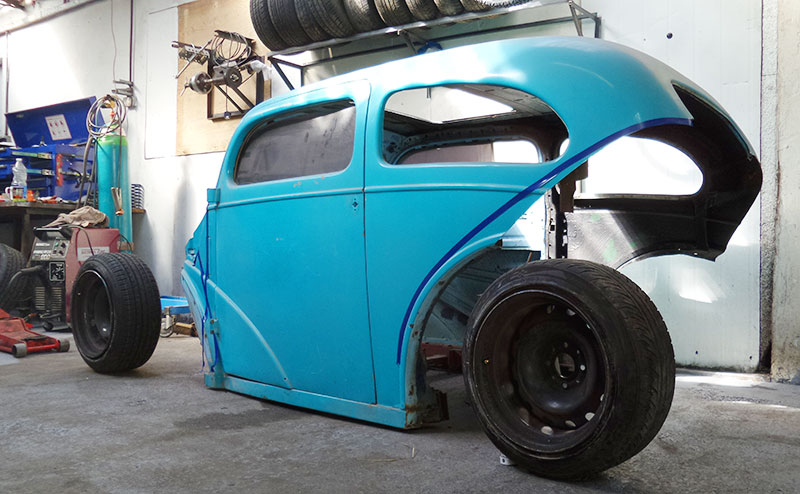 I got it back to the workshop and spent a few hours staring at it. I looked at the back deciding how best to repair or replace it but thought the lines that had been cut away could actually look quite good.

The first job was turning the outer skin into a solid shell. I started by cutting out and repairing any rusted areas with new sheet metal then making a frame work out of a 25mm box section to shape the floor tunnel and back panel. This made for a nice straight forward job of sheeting it all in. 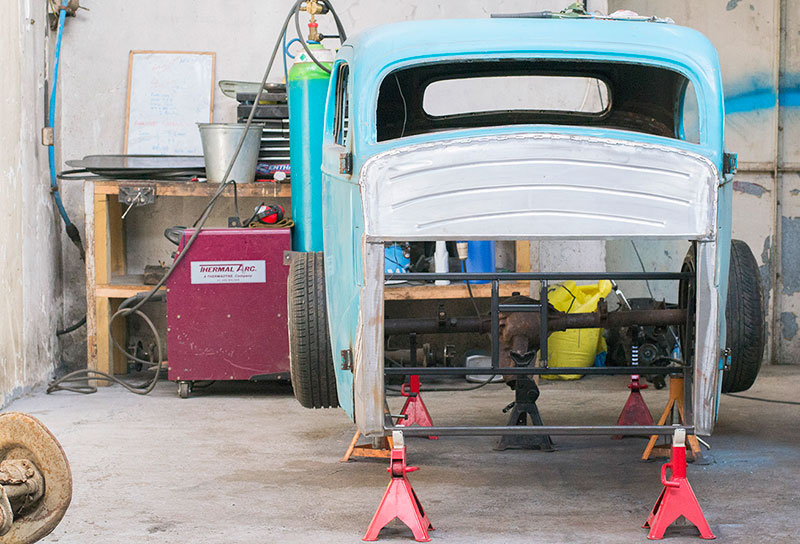 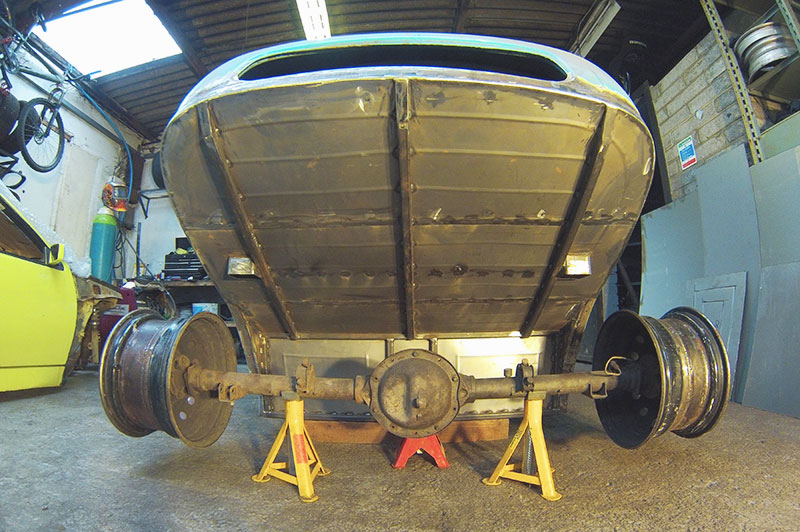 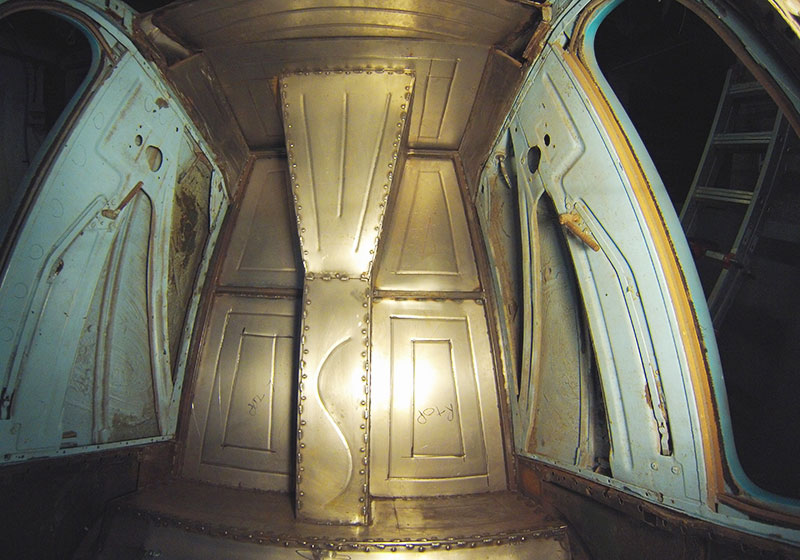 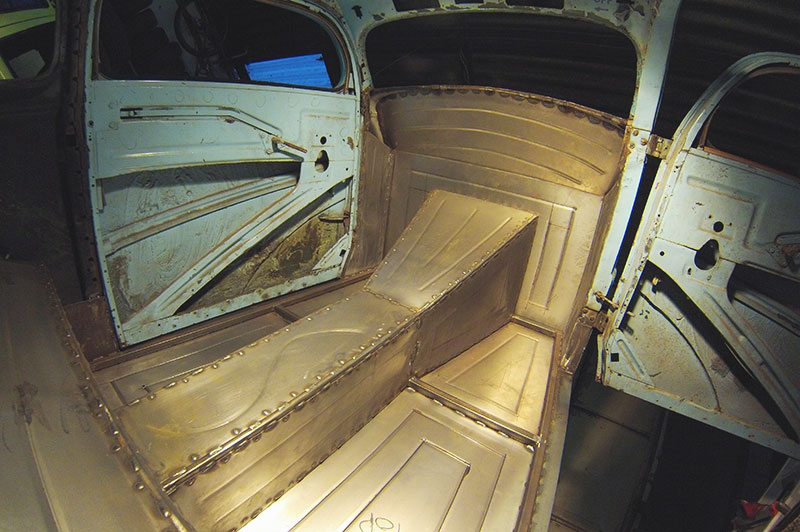 Next I did the roll cage and the tube frame front end which makes up the main structure of the car. Everything is mounted from the cage and it’s tied it into all the suspension mounting points. 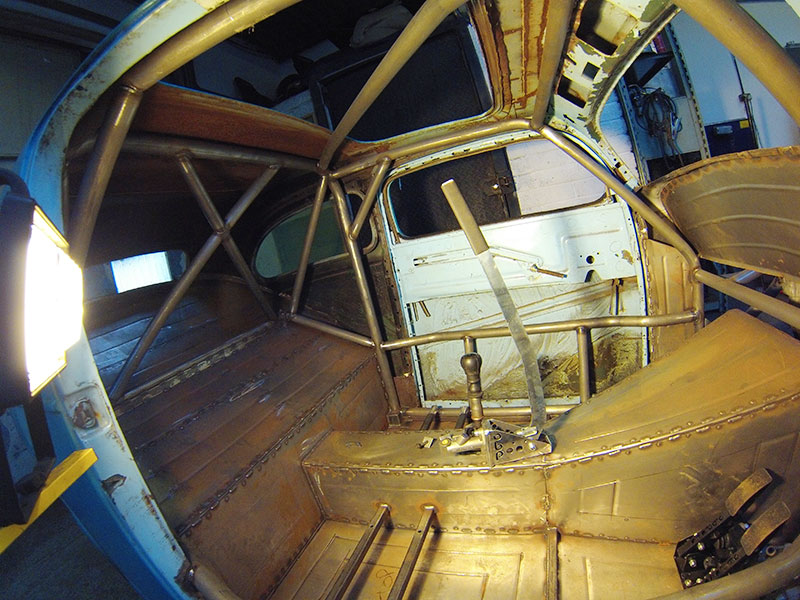 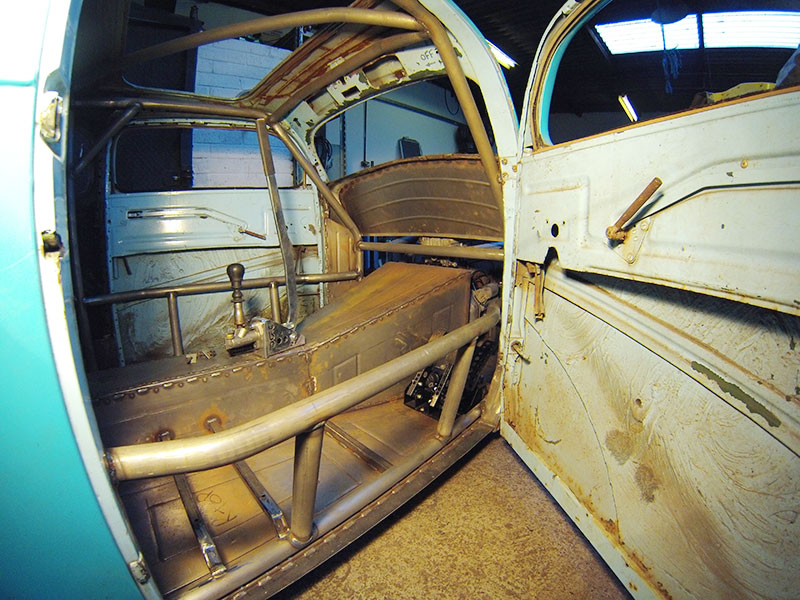 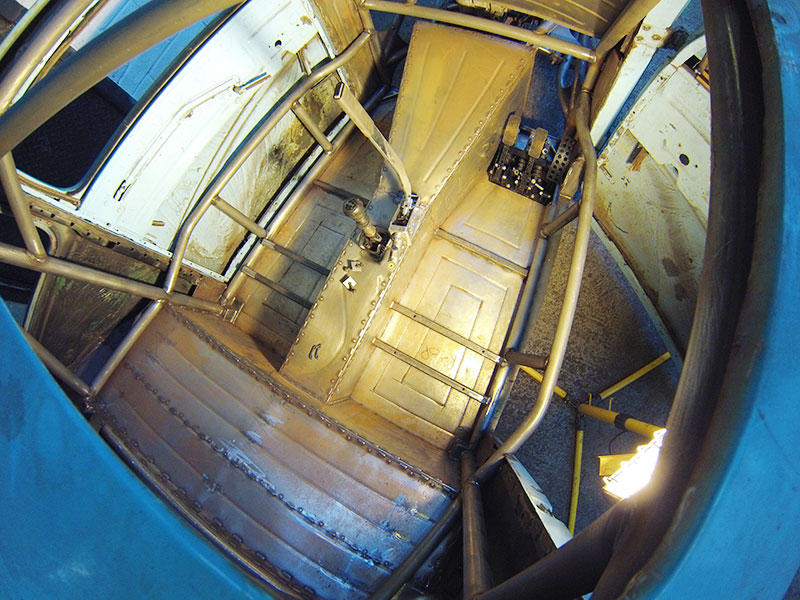 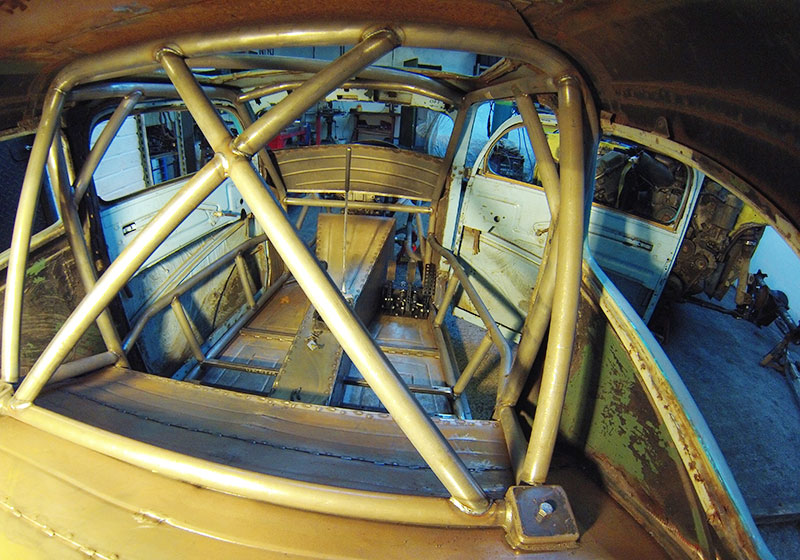 I went for a Saab B204 turbo charged engine mounted to a Vauxhall gearbox all mounted on poly bushes which connects to a Volvo axle via a custom prop shaft. 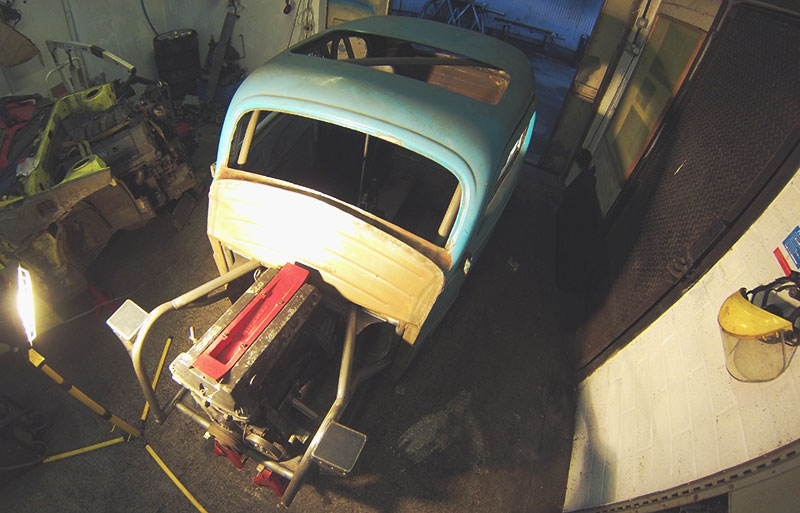 I made the grill, radiator and inter cooler as one complete bolt on unit to make removing the engine quicker,  this came in handy after my first outing in it.

Special thanks to Airtec cooling solutions for supplying me with a rad and intercooler. 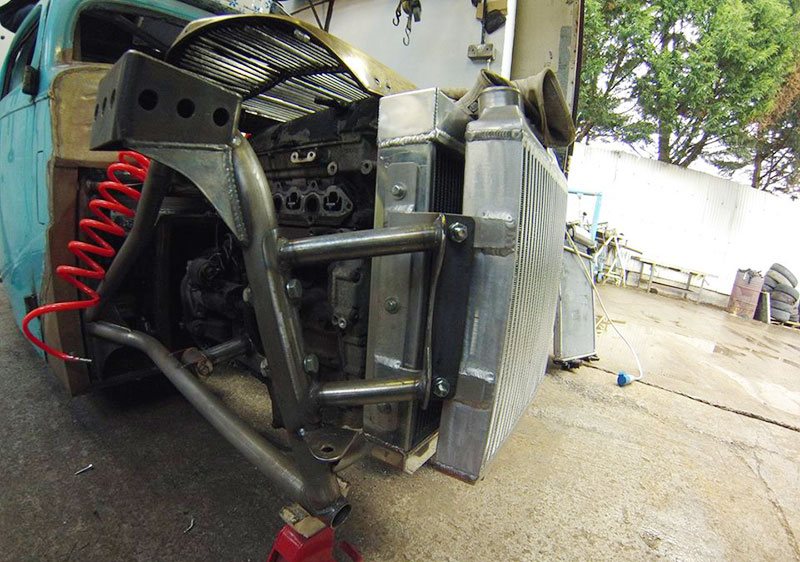 I made a custom 4 link kit for the Volvo 240 rear axle and added a bumper bar to the rear to give it a bit of shape at the back. The four link is my own design and works a treat. There are loads of ways to link a back axle but I had not seen it done like this before and wanted to try it out. 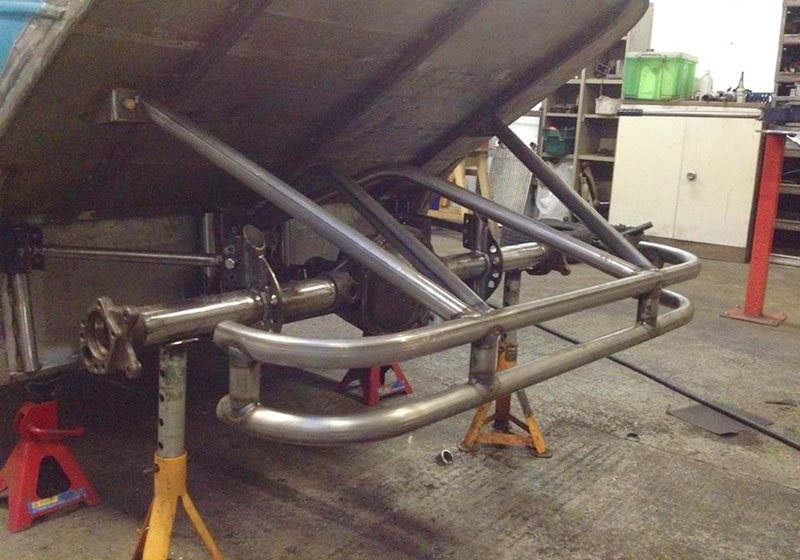 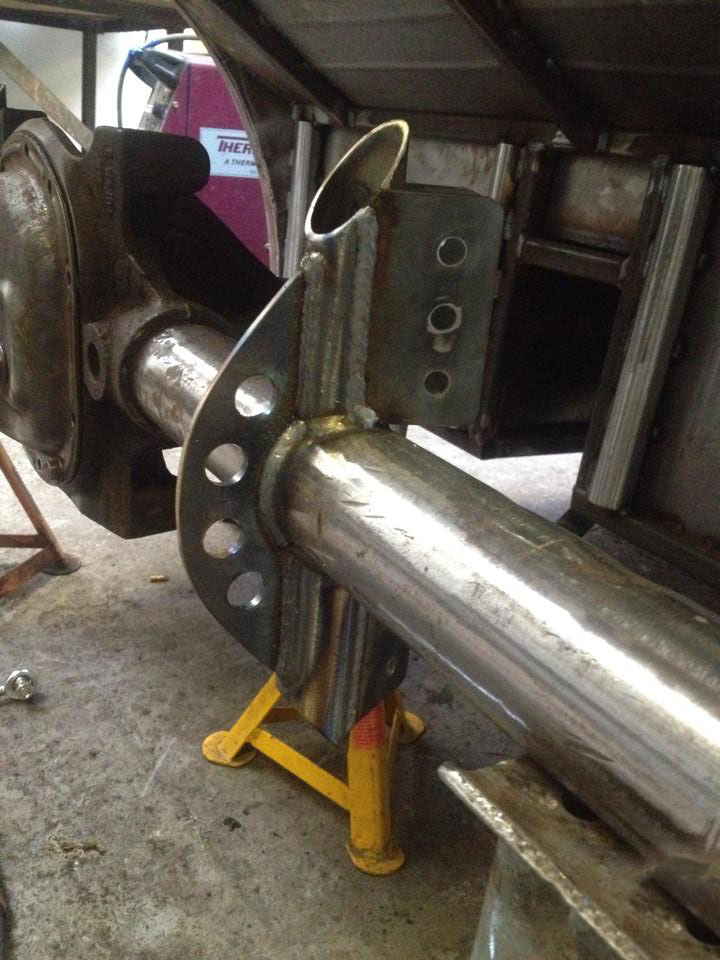 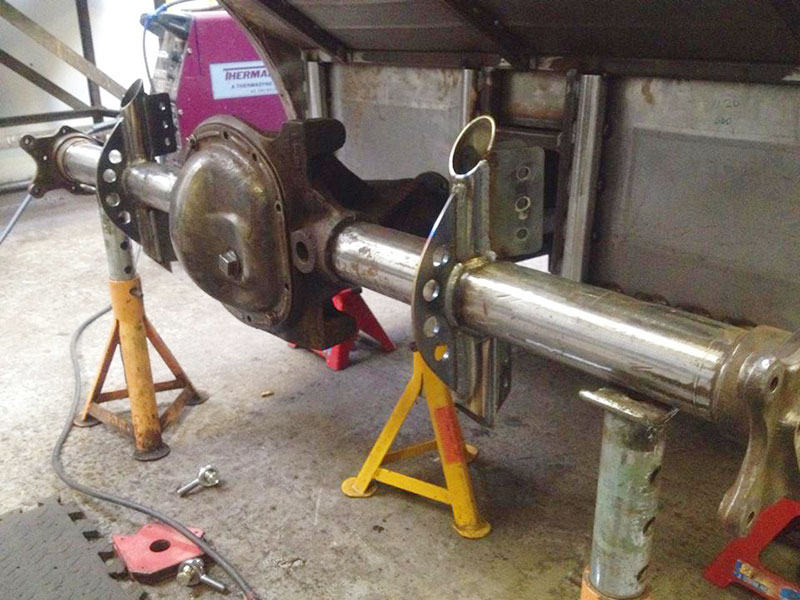 The front suspension and steering is a mix of Ford Capri, MK 2 Escort and MG parts, and some custom made wishbones and extra lock tricks. 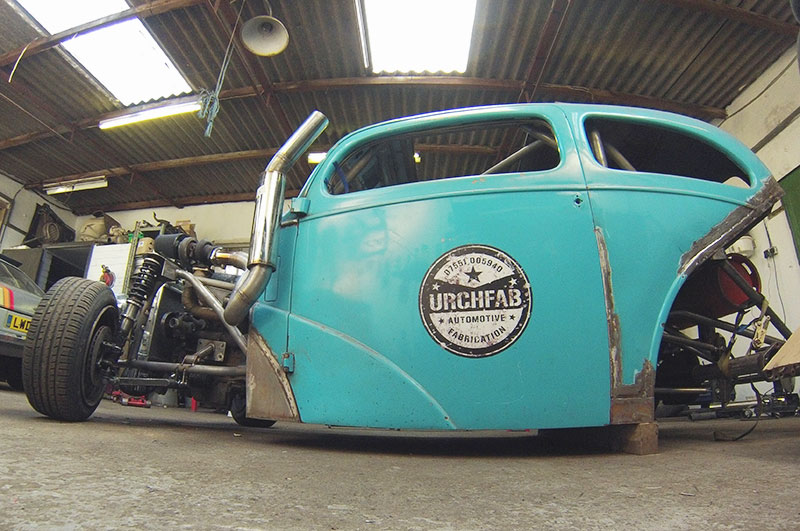 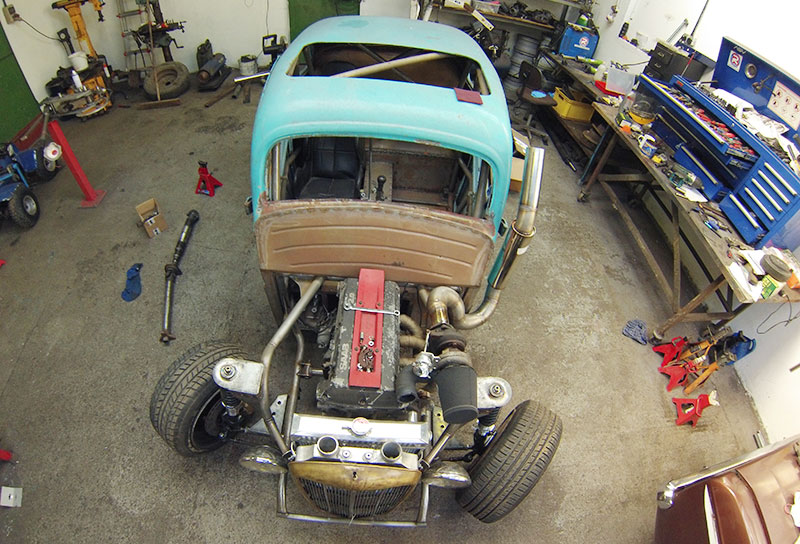 A few other custom made parts include:

– a tubular 1.75″ seamless tube turbo manifold made from scrap off cuts of roll cage tube 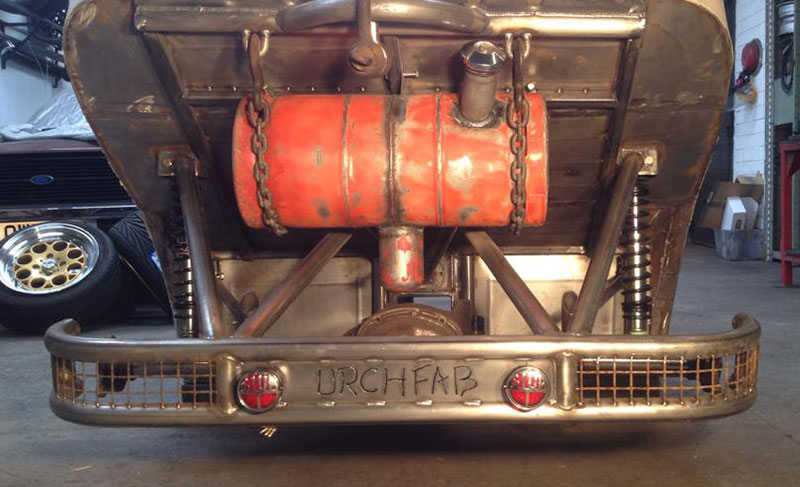 This was the first time it rolled on it’s own wheels, good times. 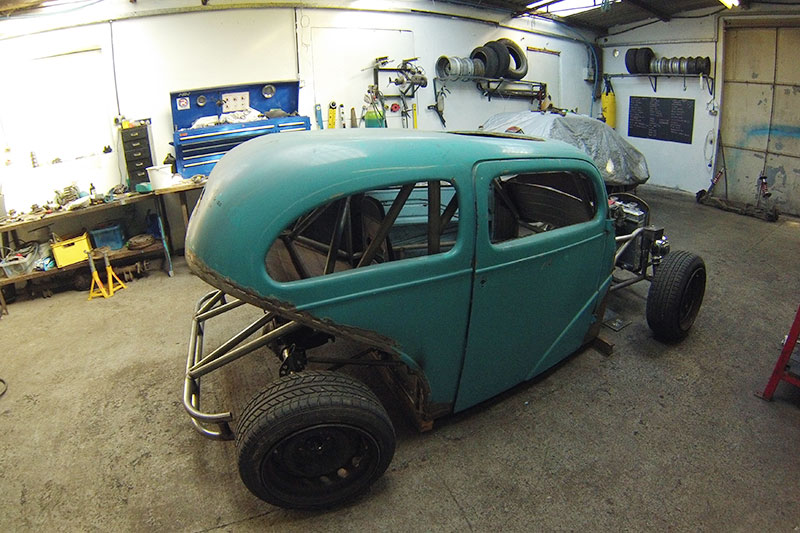 The car is 75% junk parts, a load of steel and a few shiny bits chucked in the mix.

Eight months later this was the end result… 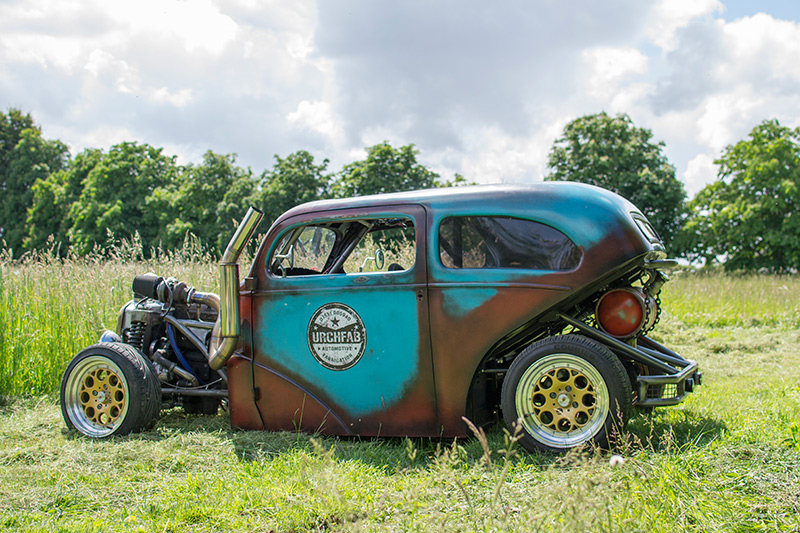 I’m really pleased with how it came out, bar a few changes to the front end design, it’s exactly the way I envisioned it at the start, not bad considering I built the whole car with no drawings.

Massive thanks to everyone that helped me out with the build.

Awesome work Matt..i stumbled across you recently browsing as I’m currently building a classic mini van so lots of welding..look forward to your updates in general and the mongrel looks a treat..