So less than 12 months after the finish of the drift rod build I was sat in the workshop feeling pretty disappointed with the outcome of all my hard graft. I had built something that was only doing half the job it was intended for.

It got all the attention and was a great advert for business but when it came to drifting it required so much commitment to get it to drift properly that it made it scary to drive.

Worse than this was the fact that I has smashed it into an Armco barrier badly bending the front end of the car.

Luckily a friend of mine came to the rescue with his chassis jig and pulled it back straight again and I was back on track within a matter of weeks. But I was never happy with the fact that things had been bent around, It was getting annoying that some parts weren’t quite lining up how they used to when I had spent so long getting everything right.

So with that I got the grinder out and started hacking. 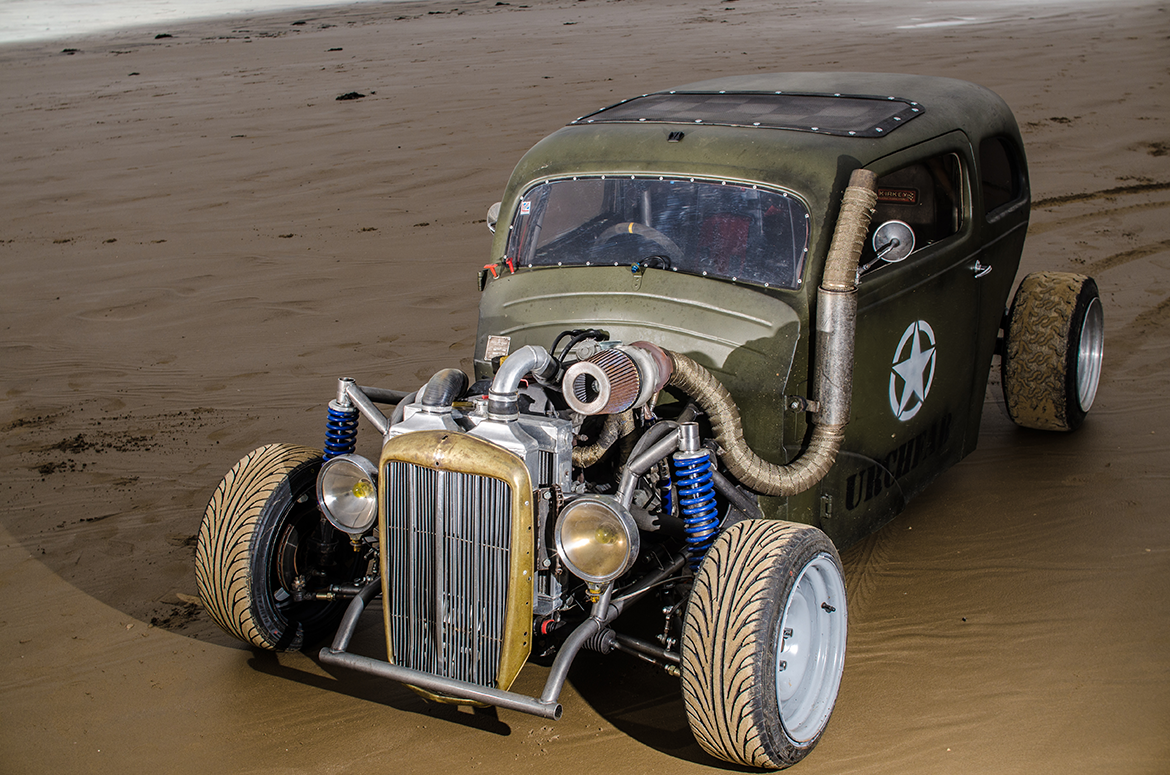 I completely redesigned and rebuilt the front end and front suspension arms. I wanted to simplify the front and make everything easier to adjust at the track. 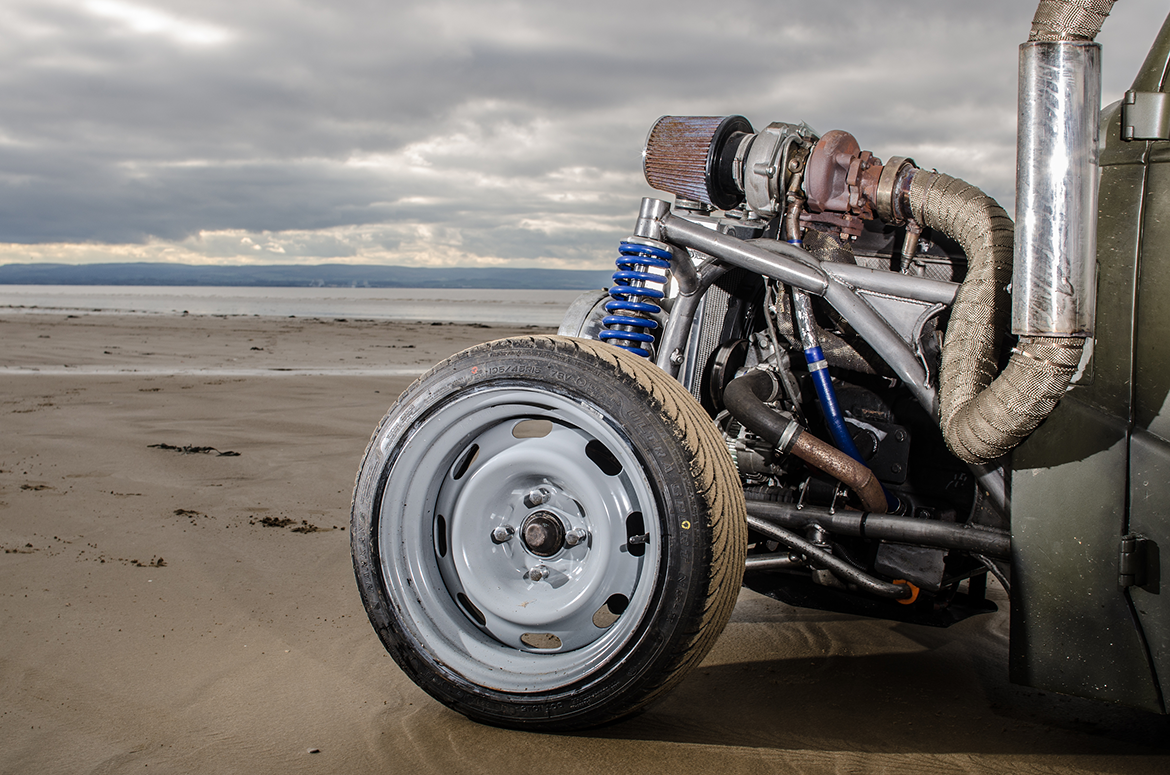 I made the strut tops one fixed point and made a 2 piece bottom arm which was adjustable for caster/camber without needing to jack up the car and remove bolts. 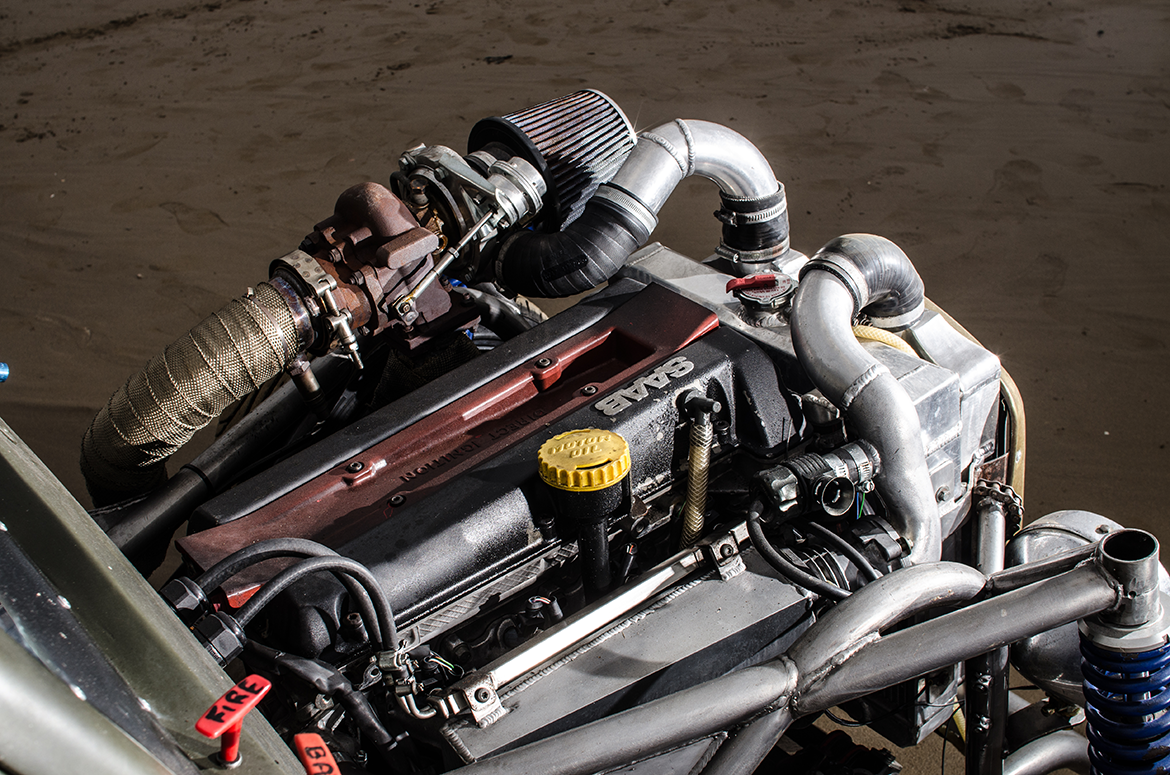 The main issue when trying to drift it was it constantly wanted to snap back straight unless you were flat on the throttle or on the handbrake. I put a lot of this down to the extremely short wheelbase and wide track width so I decided to lengthen the wheelbase. 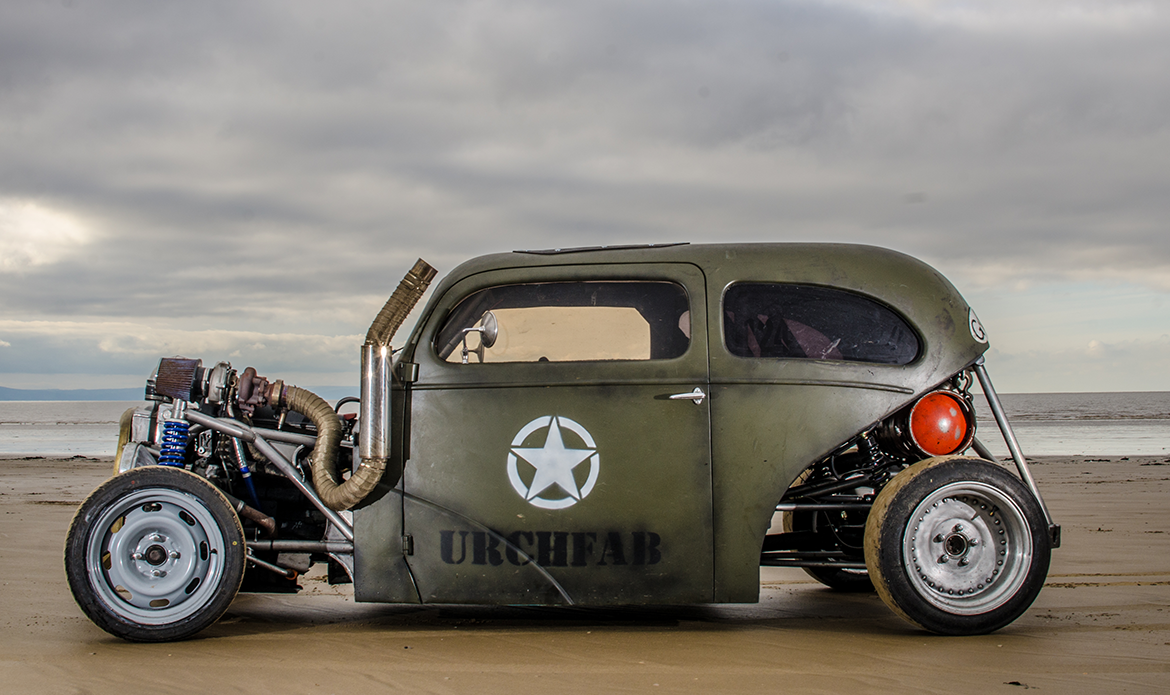 I puled the front the front struts forward slightly to gain a bit and also moved the axle backwards 5 inches, this meant making a new bumper bar too. 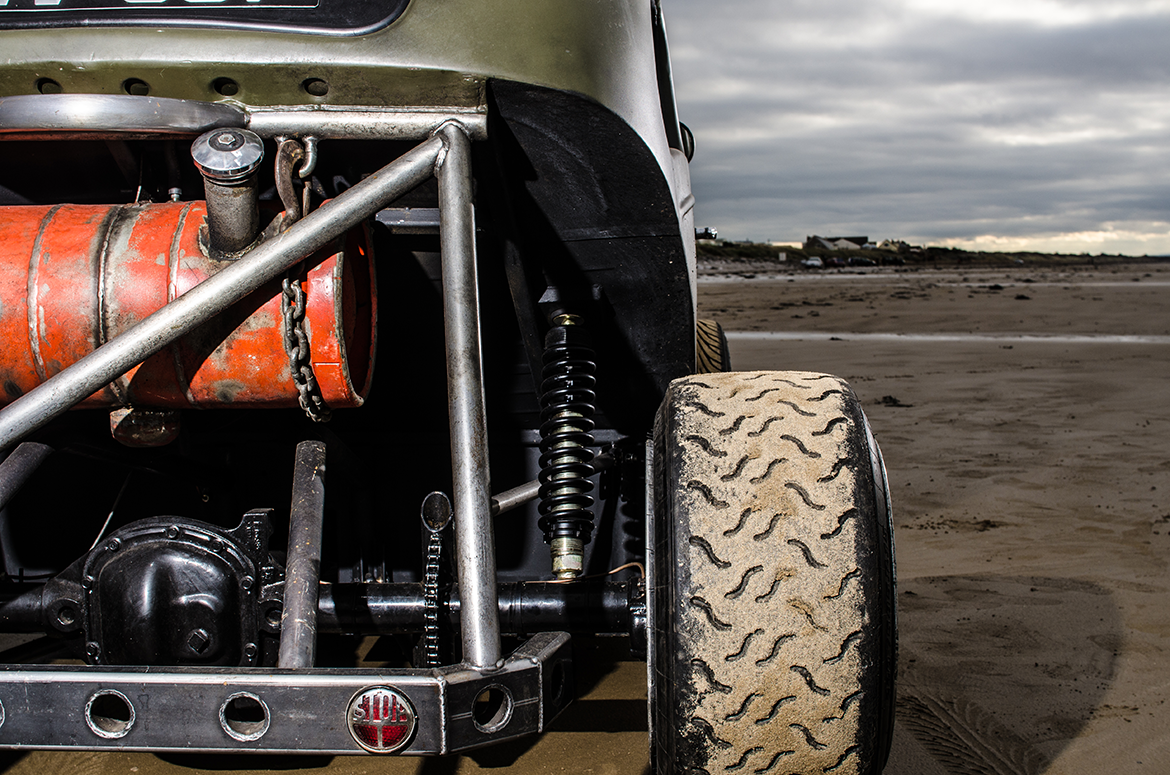 I also stuck a bigger turbo and some larger injectors on there for a bit more poke. 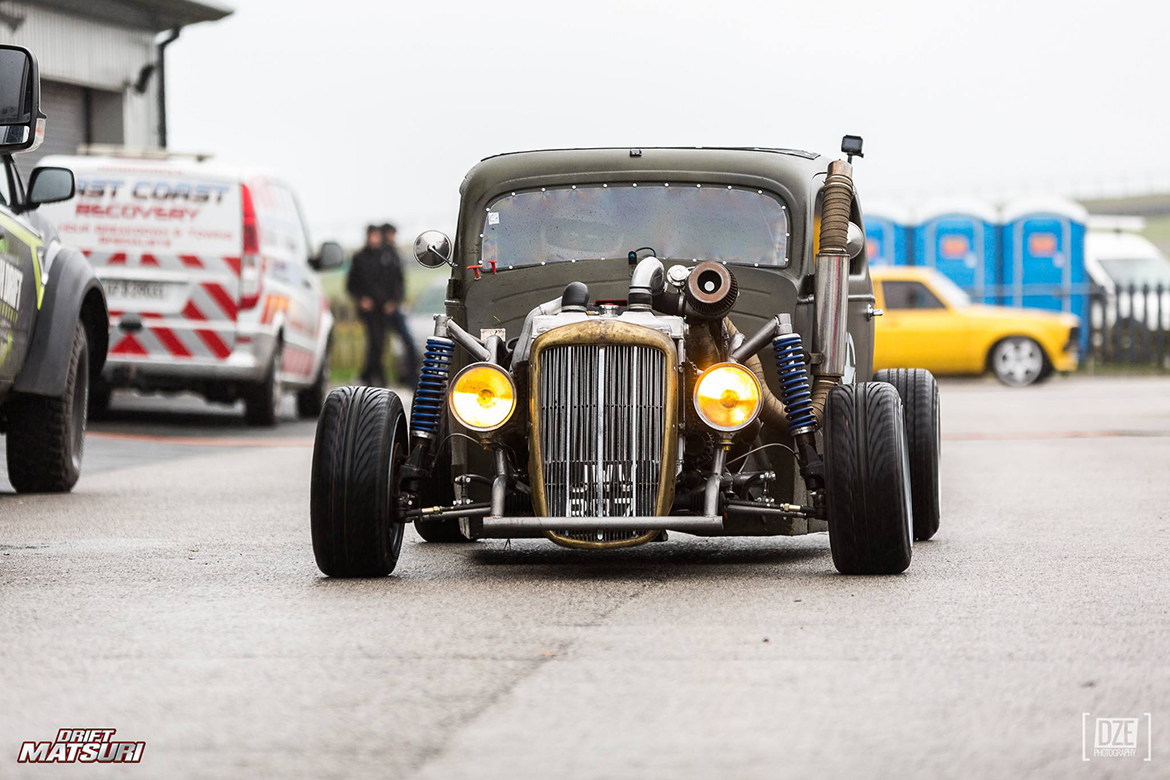 With all the extra fab work done I though I might as well change the look so went with some olive drab military paint to finish it off. 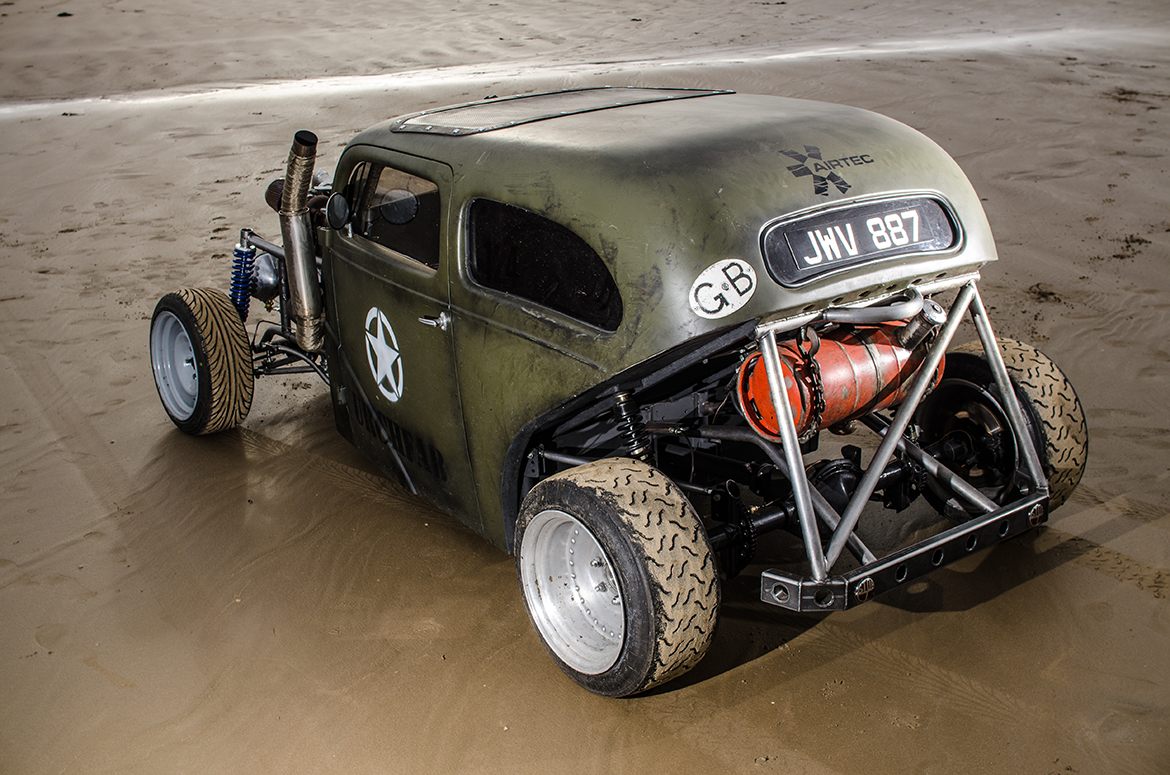 There were a lot of little things that got rushed in the original build that I wasn’t happy with so this gave me the chance to go back and sort all those also.

The end result was a massive improvement, the car was actually enjoyable to drive. It still took some commitment but I’m getting used to that. 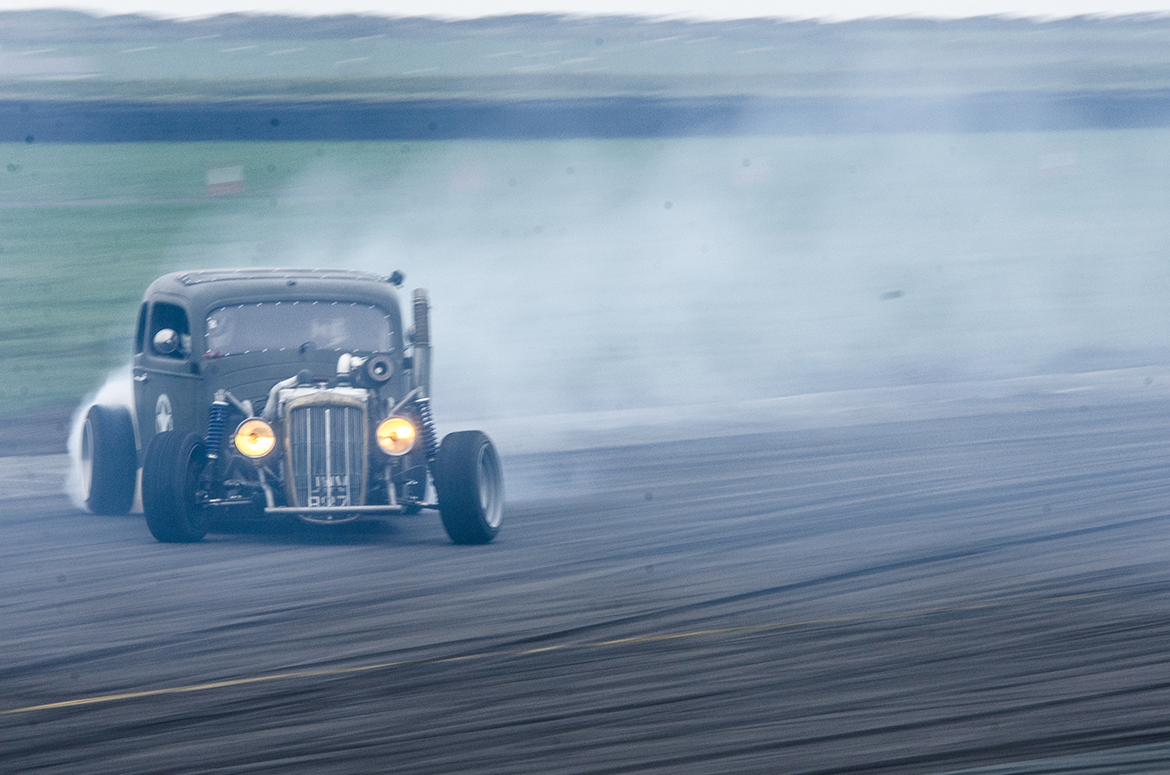 It would have been nice to get it right first time around but that’s all part of the learning process. Before starting this project I would have said that I was pretty clued up when it came to setting up a car but this build showed me that I only knew the very basics.

By far the best part of building this car has been the massive amount of knowledge I have gained doing it.

Here’s a video me and my brother made to unveil the new look.

I have been watching the mongrel build, not missed an episode,and i appreciate that you getting frustrated, fella ….chin up and keep your spirit up, the nice part is still to come and you will be so proud of your effort when its all done, all the best from a south african fan. You are a legend with the steel work

Hi Matt.
That old Pop is amazing. I am actually building one myself at the moment. Just gonna go with a Volvo 8v turbo engine, a Lada 2101 front frame and a Malibu rear end.
Much respect for an amazing build, looks great
Cheers Flemming Kristensen ( Denmark)

I admire your work/hobby builds, you are an artist! Your rat rod looks great and you drive it with such passion. I’d love to see you over here in Oregon U.S.A. driving on our many paved hillclimb circuits, auto crosses , rallies and drifting events. I have been racing since high school – 1964 Datsun Fairlady and two 60s Minis autox, 1959 Bugeye road course, Mazda RX 3 road course, hillclimb and rally, 2016 WRX autox. Keep up the fantastic work, looking forward to seeing the Mongrel on the track! Patrick.

Cheers Patrick, I will be over at some point for sure. Cheers Matt